Family has always come first with Leo. A proud father to a beautiful daughter, Paris and his amazing wife, Tiffany.

Hailing from Fort Wayne, Indiana, Leo Resig is the second of four children. He has an older brother, John, who is the co-founder and business partner in Chive Media Group. He also has two younger sisters, Emily and Megan who run theCHIVE’s sister destination, TheBerry.com.

Leo’s parents instilled a work ethic at a young age and they found child labor loopholes for him to caddy at the tender age of 13. He has since had over 50 jobs where he learned what he loved but mostly what he did not. His array of experience swayed him to be an entrepreneur and control his own destiny. He learned the facts of life through some startup failures but has always lived life with his blinders off and considers himself a futurist and a generally lucky dude. He is famous for having at least one bad idea every day.

A graduate of Indiana University’s with a SPEA degree in Management in 2003, Leo learned nothing about business. His post college professional careers consisted of a bartender, server, screenplay writer and a personal banker at Wells Fargo. It wasn’t until he moved to LA in 2005 where he landed a job as an office manager at a creative agency in Hollywood that he got the bug for digital advertising. He was promoted to the company’s first Ad Ops manager of their newly established digital media department where he learned there was more to online advertising than pop up ads.

His job at the agency led him to another adops job at Gorilla Nation (now Evolve Media), on the publisher side. This is where Leo learned how websites were monetized. At the tail end of his tenure at Gorilla Nation, Leo and his brother John started a celebrity gossip blog, Derober.com to capitalize on the celeb gossip trend. At the same time, Leo transferred from Venice Beach to Chicago with Gorilla Nation to find a nice midwestern girl to settle down with (which he did). John and Leo quickly realized they hated celebrity gossip and found themselves constantly cruising foreign viral photo blogs for a quick laugh. So they switched gears and started a photo blog in November 2008 as a one stop shop for curated viral photos in long scroll gallery form. With Leo living in Chicago and John living in Venice, they combined the CHI from Chicago and VE from Venice to form theCHIVE.com. (Fun fact, theCHIVE was almost named DarbyGunpowder.com) It was an instant hit and Leo moved back to Venice to build the business with John. Their first hire was their cousin Bob who they saved from his serving career at CPK.

It started as two brothers blogging on the couch, drinking beer with Top Gear playing in the background. Chive Media Group has grown to nearly 100 employees strong with a thriving e-comm business, nationwide beer line, a multi-city music festival and a charity that has raised millions of dollars and changed hundreds of peoples lives.

Leo and his family now reside in Austin, TX where they relocated the company from Venice in August, 2013.

John Resig is the co-owner and President, and I use the title loosely, of theCHIVE.com and TheBerry.com and is the oldest and most immature Resig, which says a lot. John lives in here in paradise (Venice, CA) with his idiot cousin, Rick. If John ever turns up dead, Rick did it.

John landed the role of Deputy Kevin Ellis on the hit HBO vampire drama, True Blood, in 2008. He is currently filming the 3rd season and, yes, it’s totally badass.

John thinks he’s Peter Pan and has no plans to leave an emotional state exceeding that of a college Freshman, ever.

Brothers John Resig and Leo Resig founded Chive Media Group and its flagship site, theCHIVE.com, in November 2008 with no capital and a lot of hustle. Leo was living in Chicago (CHI) and John was living in Venice (VE) and that’s how theCHIVE was born. More than a decade later, theCHIVE has evolved into a one-of-its-kind lifestyle brand with a variety of business lines including digital media, ecommerce, sports, and charity. Chive Media Group currently has 75+ employees, and the exec team is rounded out by Alen Durbuzovic (CTO), Mike Grisko (CFO), and Eric Spielman (CSO).

In 2014 that same executive team pioneered CHIVE TV, single-handedly creating the streaming TV-for-business category. This led them to create Atmosphere, the world’s first and only streaming platform for businesses. 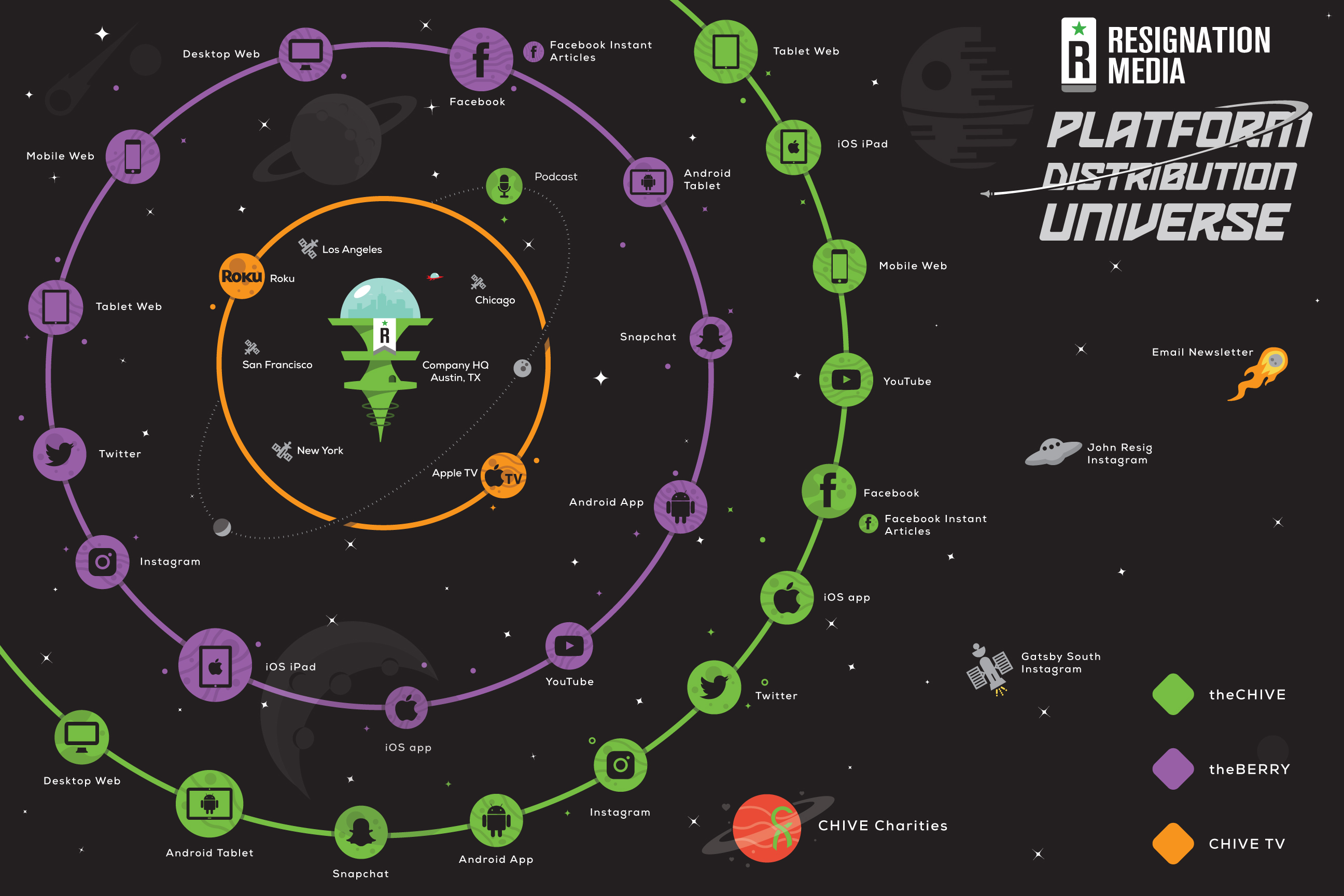